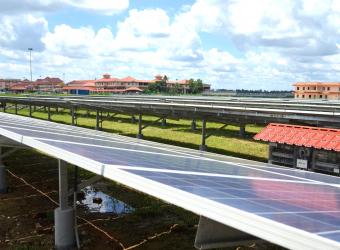 The southern Indian city of Kochi is now the proud home of the world’s first solar-powered airport.
On Aug. 18, the Cochin International Airport Limited (CIAL)—India’sfourth largest international airport in terms of passenger traffic—commissioned a 12 mega watt (MW) solar power project. The airport already had a 1MW solar power plant, which can produce 4,000 units of electricity daily.
With its new solar plant, the airport can now produce 60,000 units of electricity every day, which is more than enough to meet its daily requirement.
“We initiated a pilot project in February 2013 as part of our plan to shift to renewable energy by setting up a 100 kilo watt unit,” VJ Kurian, managing director of CIAL told Quartz in a telephone interview. “When we found that feasible, we set up a 1MW unit in November 2013.”
“We did not want to be identified as just another airport and be confined to it,” Kurian added.
After the airport found the 1MW project financially viable, it invited tenders to set up a 12MW project within the airport complex. “Work on the 12MW project started in February 2015 and was completed in less than six months” Kurian said.
Spread across 45 acres of land—equivalent to 25 football fields—the project was built by German engineering company Bosch for Rs62 crore ($9.5 million). The area for the solar unit was earlier designated for setting up a cargo handling facility.
Since the airport expects to produce more than what it is likely to consume, CIAL is planning to feed some of the power into the state grid.
“Over the next 25 years, this green power project will avoid carbon dioxide emissions from coal fired power plants by more than 3 lakh metric tons, which is equivalent to planting 3 million trees or not driving 750 miles,” CIAL said in a statement.
Meanwhile, close on the heels of Kochi, another Indian airport has also laid out plans to focus on solar. On Aug.18, Kolkata’s Netaji Subhas Chandra Bose International Airport, said that it plans to set up a 15 MW solar power plant on 60 acres of land.
India is currently in the midst of ramping up its solar power generation. The Narendra Modi government has plans to increase the country’s solar power capacity from the existing 4GW (gigawatt) to 100GW (gigawatt)by 2022.
To fund such an ambitious expansion, the government expects aninvestment of $100 billion in the sector in the next seven years. Some of Asia’s biggest billionaires—including SoftBank’s Masayoshi Son, Gautam Adani and Anil Ambani—have already promised massive investments in the sector.