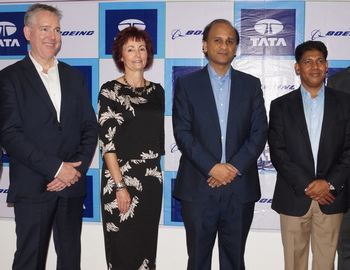 Boeing and Tata Advanced Systems (TASL) today signed a framework agreement to collaborate in aerospace and defence manufacturing and potential integrated systems development opportunities, including unmanned aerial vehicles.  The companies intend to access markets jointly for products and platforms developed together by Boeing and TASL.

The agreement was signed by Shelley Lavender, president of Boeing Military Aircraft, and Sukaran Singh, managing director and chief executive officer of TASL.

TASL is already on contract to manufacture aerostructures for Boeing’s CH-47 Chinook and AH-6i helicopters.

“This agreement with TASL is significant because it demonstrates Boeing’s commitment to expanding its aerospace manufacturing footprint in India,” Lavender said.

“As we step into our 100th year in business, a new aerospace partnership with India is the perfect milestone to accelerate the momentum we have generated for making in India,” said Pratyush Kumar, president, Boeing India. “It is noteworthy that TASL will produce Chinook helicopter parts in India even before the procurement contract is signed with the Indian government.”