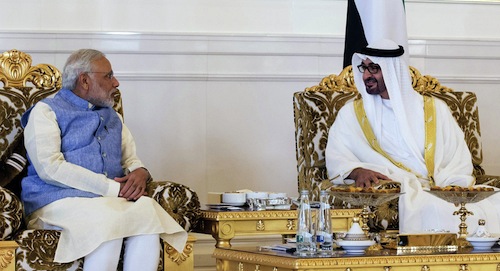 The visit of an Indian Prime Minister to UAE after 34 years marks the beginning of a new and comprehensive strategic partnership between India and UAE in a world of multiple transitions and changing opportunities and challenges.

In recent decades, UAE’s economic progress has been one of the global success stories, transforming the nation into a regional leader and a thriving international centre that attracts people and business from across the world. India has emerged as one of the major world powers, contributing to the advancement of global peace and stability. India’s rapid growth and modernization, along with its talented human resources and large markets, make it one of the anchors of the global economy. The dynamism of the two countries have translated into a rapidly expanding economic partnership, making India UAE’s second largest trading partner; and UAE not only India’s third largest trading partner, but also India’s gateway to the region and beyond.

India and UAE share centuries-old ties of commerce, culture and kinship. Today, the Indian community of over 2.5 million is a major part of UAE’s vibrant society and its economic success. It also makes a significant economic contribution to India and constitutes an indelible human bond of friendship between the two nations.

An extensive framework of agreements, including economic, defence, security, law enforcement, culture, consular and people-to-people contacts constitute solid bedrock for elevating bilateral cooperation across the full spectrum of our relationship.

Today, as India accelerates economic reforms and improves its investment and business environment, and UAE becomes an increasingly advanced and diversified economy, the two countries have the potential to build a transformative economic partnership, not only for sustained prosperity of their two countries, but to also advance progress in the region and help realise the vision of an Asian Century.