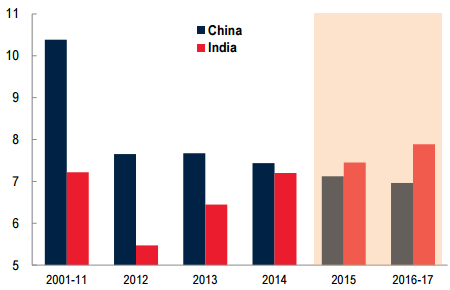 China is currently undergoing a major shift from its investment-led, export-driven economic model to one led by domestic consumption and this transition has implications for global capital, commodities as well as the broader world economy, believes noted economist Sanjeev Sanyal. In an interview with CNBC-TV18’s Latha Venkatesh and Sonia Shenoy, Deutsche Bank Global Strategist and Managing Director Sanyal said the latest crisis in the world’s second largest economy is resulting from the above-mentioned shift and it is going to alter global dynamics in a major way. «China will continue to slow down [during the transition], capital will flood out and will have to go elsewhere. It remains to be seen if countries such as the US or India can absorb this excess capital [that will flow out of China],» he said, adding that moves such as interest rate cuts by the Chinese central bank will only help smoothen the transition. The development is significant from India’s standpoint as it could use cheap global capital to build capacities and overhaul its infrastructure, as well as benefit from what may be a broken commodity market for years. «But it will require leadership reform. Cost of capital has to come down structurally. Bank reforms have to take place,» Sanyal said.