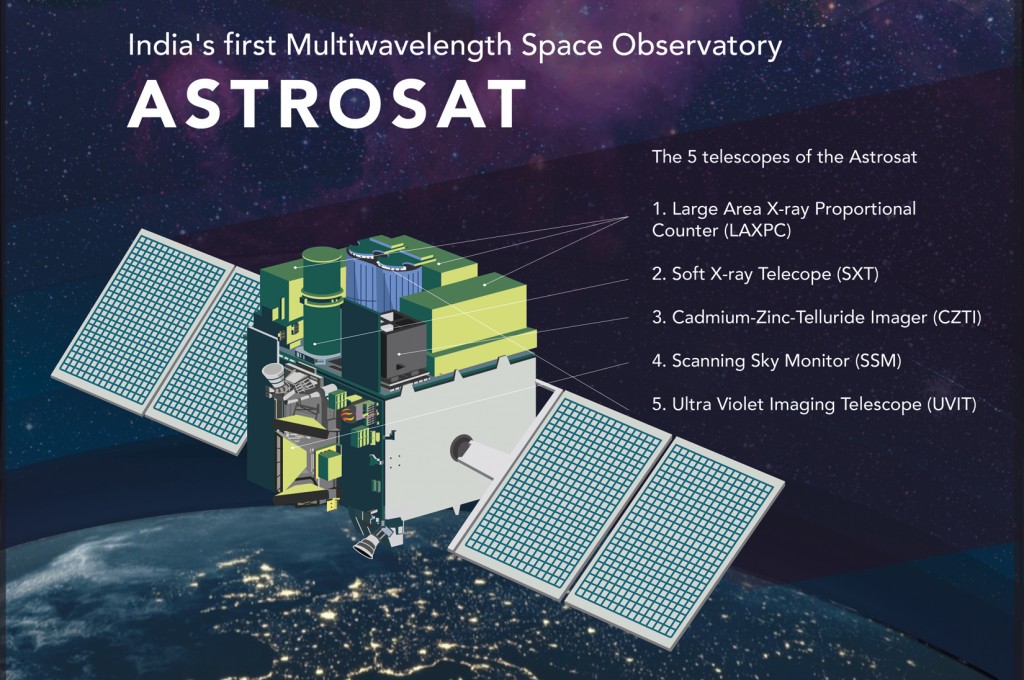 India has sent its first ever observational space telescope, called ASTROSAT, into orbit, after a successful launch from the Polar Satellite Launch Vehicle (PSLV-C30) rocket.

From its low-Earth orbit altitude of approximately 650 km, ASTROSAT’s mission is to help astronomers develop a more detailed understanding of the Universe. The satellite, launched by the Indian Space Research Organisation (ISRO), is a multi-wavelength space observatory effectively designed to be India’s answer to NASA’s Hubble telescope.

According to the Tata Institute of Fundamental Research (TIFR), which helped develop many of the optical instruments onboard the spacecraft, ASTROSAT features “unprecedented capability” to simultaneously observe cosmic objects in visible light, the ultraviolet waveband and the x-ray waveband, from very low-energy through to very high-energy x-rays.

“ASTROSAT is a quantum leap from previous modest-sized payloads on other Indian satellites,” said Prahlad Agrawal, a professor with TIFR, in a press release. “It is an internationally competitive observatory that will enable Indian scientists to work in frontier areas of high-energy physics.”

“The instruments developed by TIFR will give us a capability unrivalled in the world for the next five to 10 years,” added Sandip Trivedi, director of the institute. “We look forward to some great science results.”

Within this timeframe, the satellite’s primary objectives are to study binary star systems containing neutron stars and black holes, estimate the magnetic fields of neutron stars, and study star birth regions and high-energy processes in systems beyond our galaxy. ASTROSAT will also detect new x-ray sources in the sky and perform a limited deep field survey of the Universe in ultraviolet.

While ASTROSAT might seem like a competitor to the Hubble telescope, in some regards India’s observatory platform is not actually as powerful, despite being launched a quarter of a century later. Its multi-wavelength capabilities are one of a kind, but it’s a much smaller satellite with an intentionally limited lifespan, and the images it produces will be less precise than those from Hubble.

The launch of ASTROSAT comes almost exactly a year after the country’s crowning space achievement, when its Mangalyaan orbiter spacecraft successfully made the journey to Mars. “History has been created today. We have dared, to reach out, into the unknown,” said Indian prime minister Narendra Modi at the time, celebrating the feat.

ASTROSAT’s successful launch further cements India’s fast-growing astronomy credentials, marking only the fifth time a space program has succeeded in sending a space observatory into orbit, following the US, Russia, the European Space Agency, and Japan.