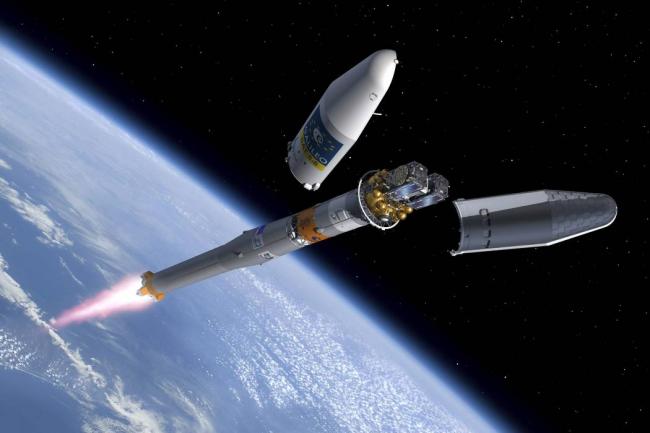 India’s Polar Satellite Launch Vehicle is set for liftoff Friday with five satellites built in Britain to look down on Earth and test a solar sail’s ability to clean up space junk.

The PSLV is counting down for launch at 1628 GMT (12:28 p.m. EDT) Friday from the Satish Dhawan Space Center on India’s east coast, where liftoff is timed for 9:58 p.m. local time.

India’s workhorse launcher, first developed more than 20 years ago, will make its 30th flight Friday, aiming to delivery its five satellite payloads to an orbit 647 kilometers — 402 miles — above Earth.

Three Earth observing satellites made by Surrey Satellite Technology Ltd., or SSTL, are the main passengers on Friday’s launch. The spacecraft are the fruits of a 2011 deal inked between Chinese and UK companies worth approximately $170 million to provide high-resolution satellite imagery of China’s growing cities.

The trio of satellites are part of the so-called DMC3 constellation, and together the three platforms can image the same place on Earth daily, according to SSTL officials.

The DMC3 satellites were manufactured under contract to DMC International Imaging, or DMCii, a subsidiary of SSTL. DMCii coordinates a network of Earth observation satellites owned operators based in the UK, China, Spain and Nigeria for commercial imagery sales and humanitarian emergencies.

The acronym DMC stands for Disaster Monitoring Constellation, and DMCii is based in Guildford, near SSTL’s headquarters.

DMCii ordered the three new satellites after it struck a deal with Beijing-based 21AT, which sells imagery to the Chinese government to monitor urban growth, land and water resources, pollution and natural disasters. Under the terms of the agreement, 21AT is leasing 100 percent of the imaging capacity of the three DMC3 satellites over their seven-year design lifetimes, while DMCii will own and operate the spacecraft.

Officials said the structure of the deal gives 21AT access to high-resolution imagery without the complexity of flying its own satellites.